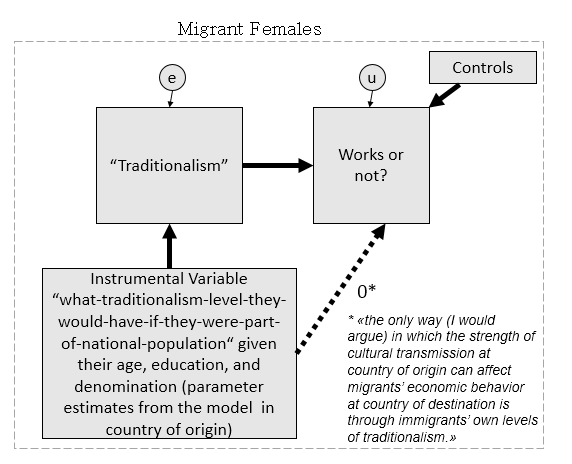 What I disliked is a specific implementation of the idea.

IV is what level of traditionalism a migrant woman would have if she still lived in her origin country given her age, education, denomination and parental education. Theoretically, it should produce a variable that captures the differences between migrants that are due to their origin culture, exclusively.  If IV should capture only differences evolved from culture, it is not clear why the author used for computing of this IV individual-level variables such as age, education, and denomination.  It would be reasonable (and much clearer and simpler) if IV were a mere mean of ‘traditionalism’ in the country of origin. In this case, instrumenting migrants’ traditionalism would reflect only the differences that occurred exclusively due to differences between their countries of origin. It seems that ambiguity in computation of IV is related to a vague concept of culture, which is viewed as a mixture of individual- and country-level phenomenon (more details below).
There are two technical conditions of a good IV, and both are marginally met in this model. This IV may not be a good instrument, since it poorly correlates with a regressor, at least in some countries (table 3). Second, it is assumed that predicted traditionalism (IV) is not correlated with participation in labor force, because “the only way (I would argue) in which the strength of cultural transmission at country of origin can affect migrants’ economic behavior at country of destination is through immigrants’ own levels of traditionalism.” Well, “I would argue” is not a strong argument. For example, culture may affect female labor participation through their husbands’ opinion.
(I am not comfortable with many studies based on IV regressions in general, because different authors often make it seem to be a proof of causality, although IV only removes endogeneity, which in turn may mean a reciprocal relation or even reversed causality. And none of IVs  resolves this issue. The point is that the problems of causality are not limited to computational problems, but are logical.)

As the author puts it in the first line, the paper aims to answer the question “What role does culture play in shaping people’s behavior?”
So where is a culture?
The author used the term ‘culture’ 247 times in the paper – whereas the measurement of a whole culture is limited by a single Schwartz item “Tradition is important to him. He tries to follow the customs handed down by his religion or his family.”  Through the paper it is called either culture, cultural traditionalism, culture trait, and finally values.

For instance, two people may both have scores of 3 for tradition values. One has lower scores (1 or 2) for all the other values, while the other has higher scores (4-6) for all the other values. Obviously, even though both people have the same score for tradition, tradition has higher relative priority for the first person than for the second. Despite their identical absolute scores for tradition, we would expect the first person to attend religious services more often. Thus, to measure value priorities, we need to correct for individual differences in scale use. (Schwartz, 2004)

What kind of behavior is under study?

Under economic behavior the author means whether a woman works or not, or, to be more precise, her dichotomized occupational status.  I can agree that working is a behavior, but I cannot agree that being out of the labor force is behavior, this is rather an output of many factors. We know that output is not always a result of behavior and these two should be differentiated (see Ajzen, Fishbein, 1980). What about disabled and retired and those who doesn’t have a work permission? What about their husbands’ opinion? What about time they spend doing their housework? All these may be the reasons of the output status “out of the labor force” not related to volatile control of behaviors of these women.

I would say that the cross-classified multilevel regression (CCRM), that I employed for a somewhat similar analysis, also solves the problem of endogeneity.  Assigned level of traditionalism in country of origin is by itself a very exogenous variable, which can be used to predict different things. And by using cross-classified model it is possible to get additional information about the impact of country of migrants’ residence. Besides, the CCRM is conceptually  much more clear in separating the levels of analysis. This is what might have been used.